And I’m pontificating on the fact over at the BSB blog as part of the build up to the online Bookathon event this weekend. Full programme available:  Program 2020_final_final and registration happens here.

“A Carriage of Misjustice is another great mystery.” Read more at Wicked Reads.

And an update for those of you who’ve been following the saga of our lounge. The cushions have arrived!

Are we seeing the beginning of the end or the end of the beginning? (Thinking Covid-19, not anything existential!) I really do hop you’re all getting on okay and finding new ways to live which go someway towards compensating for the old ways that are temporarily – we hope – gone.

A couple of new releases have happened since the last newsletter. A Carriage of Misjustice is out in ebook and print. Very pleasing review at Promoting Crime Blogspot.
“Robin and Adam are engaging protagonists, although the heart-stealer is Campbell, their adorable (and very spoiled) Newfoundland dog.”

Even more exciting is the first Lindenshaw audio book. Best Corpse for the Job, which has been out for a while in ebook and print, is now available to listen to. I’m very pleased with the narrator’s interpretation.

Tea and sympathy have never been so deadly

I’m delighted with the review at Love Byte Reviews. I loved the small English village feel there was to this book. There was this cozy mystery vibe over it all, filled with a myriad of different characters that you might expect to find in a small village, the nosy and gossiping ones, the evasive ones. The intrigues and secrets. Charlie Cochrane definitely nailed it all.

I’ve been tidying up my free story files and found I’d omitted this from the collection. It’s the investigational (and romantic) adventures of Johnny Stewart, who was Jonty’s great nephew. You can find the whole thing here at my page full of free stories.

Roger turned on his heels, and left the room, with a dismissive, “This tie needs straightening.”
He ran into his maternal aunt on the way to finding a mirror, which was blessing in that she sorted it for him and kept him out of his mother’s way until he could calm down.
“I hear Johnny Stewart will be here tonight. I’ll enjoy sitting next to him. There.” Aunt Jacinta added the finishing touch to the bow.
“Better you than me. Johnny’s the most insufferable person it’s ever been my misfortune to come across.” Roger ran his hands through his hair.
“You must dislike him intensely,” his aunt said, drily, “to employ that particular gesture. You always used to do it as a lad when you came to stay and we presented you with something you didn’t want to eat. Or asked you a question you didn’t want to answer.”
He felt a bloody embarrassing flush rising up his neck; why did Aunt Jacinta always see straight through him? Did she know exactly what was going on inside his mind to make him so defensive?
Johnny bloody Stewart. Why had he got to keep coming back and making life so difficult?
Roger tried to rally. “Anyone would run their hands through their hair—or tear great clumps of it out—if they had to deal with him for any length of time. He was bad enough at school and hasn’t improved with maturity.”
“That sounds like you then, dear. Peas in a pod.” Aunt Jacinta fixed him with a smile like an auger. She might look one hundred and forty-three in her bombazine and lace, but that look, and the machinations of the mind behind it, could strike fear in any man. “Just don’t vex him, would you, Roger? If he’s hardly your favourite person, at least be polite.”
“I will do my utmost.” He swallowed hard. Normally, medical students would be beneath his mother’s notice, but this one being the great-grandson of a lord made a difference and she’d been delighted to invite him in the absence of Roger’s godfather, who was at his now hopefully appendix-less wife’s bedside.
How could Roger ever explain about Johnny? There were two insurmountable obstacles—finding the right words to make anyone else understand the feelings he’d had for Johnny since he first caught sight of him as a spotty youth of sixteen and having to deal with his aunt’s inevitably negative reaction if he did get his point across. He supposed he was too old, and the matter too serious, to just get away with being taken over her knee, whacked, sent to his room and then allowed to come down half an hour later if he showed the right amount of contrition.
Not even Aunt Jacinta could be as understanding about things as to allow that.
Disgrace, disorder, his mother’s tears, his father’s horsewhip? Not that his father would actually resort to the whip, no matter how often he talked about using it on miscreants, although the outcome would be just about the same. Cut off without a penny and none of the Henleys ever talking to him again. And while that idea might be an attractive one in the case of Uncle Frederick, the general aspect didn’t appeal.
Try as he might, Roger couldn’t think of any way to sweeten the pill, whatever words he could use to describe how he felt.
There was this chap at school. Stewart, J.O. Year below me; came to the place when I was seventeen. I liked the look of him from the start; he had an air about him, power restrained and all that. He matured and filled out a bit faster than more of the spotty oiks of his age. Lost most of the spots, too. Cocky little sod, though. Opinionated.
“Roger!”
“Yes, aunt?” His mind came back from school days to the present, and two females, his mother having appeared, trying to usher him out of the suite.
“Daydreaming again. His worst fault,” she said, bundling him through the door.
Roger reminded himself that if that remained her opinion of what was his worst fault, then all in the garden was still rosy.

And finally – thinking back to one of our last ‘pre-lockdown’ adventures. Exquisite Roman mosiacs, all the way from Sussex! 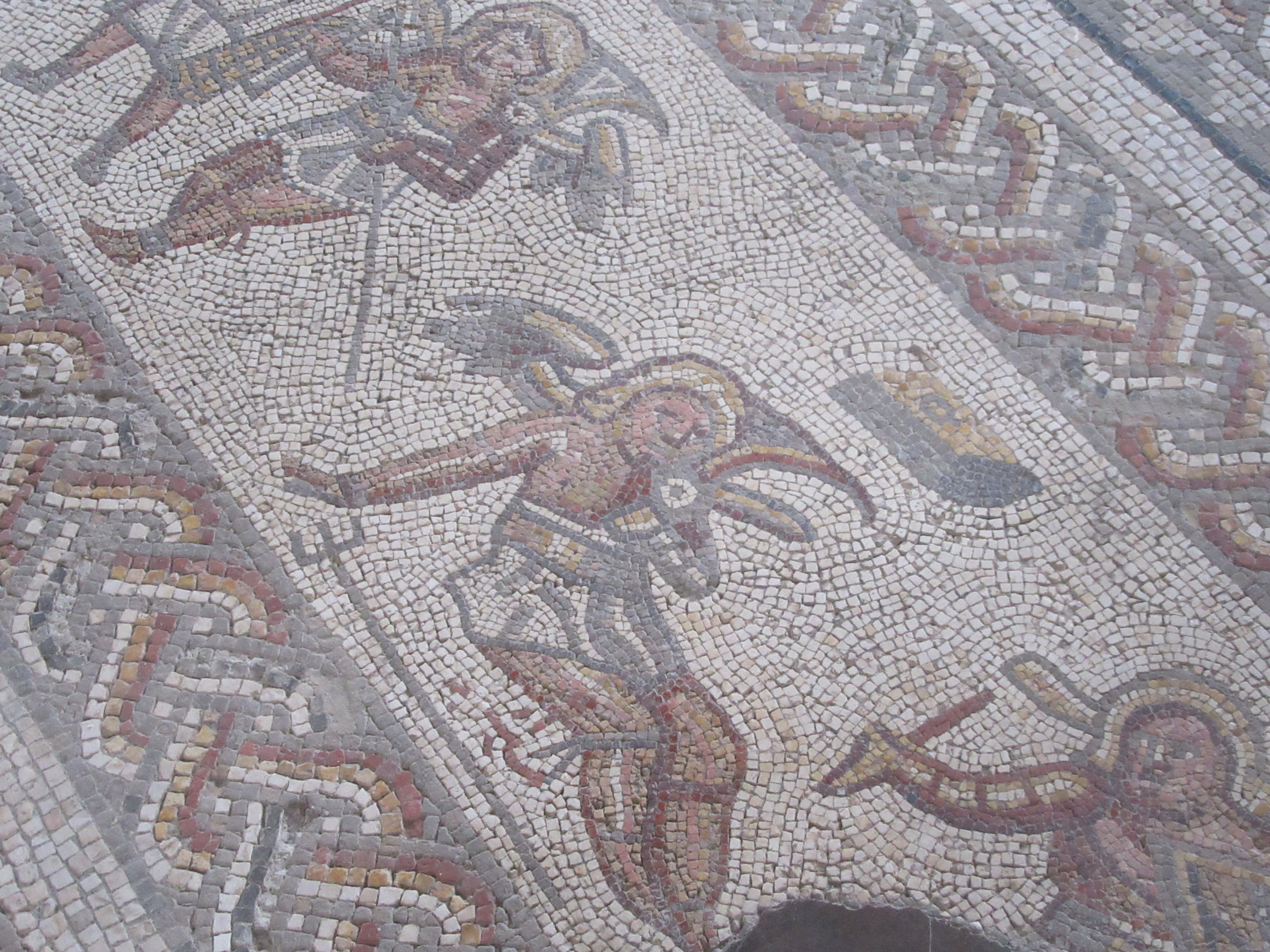 Then here one is.God bless us every one tells the story of what happened to Tiny Tim when he wasn’t so Tiny.

Being allowed to drive somewhere to walk, we decided to head up to Stockbridge down, where there are Bronze age barrows, butterflies and an Iron age hill fort. The weather was perfect for walking, there were people about but everyone was being sensible. Magic.

Is out now! Could this week get any more exciting, Lindenshaw wise?

A Carriage of Misjustice came out yesterday and I almost missed it! (Two charity meetings, both with notes to write up, then a 60 page government document to read. Such fun.) And it’s had its first review:

Robin and Adam are engaging protagonists, although the heart-stealer is Campbell, their adorable (and very spoiled) Newfoundland dog. Read more at Promoting Crime Fiction Blogspot.

Detective Chief Inspector Robin Bright and Deputy Headteacher Adam Matthews have just tied the knot, and all they want to do is sink into blissful domesticity. Unfortunately, there’s no chance of that when a chilling murder at a rugby ground takes Robin miles away to help his old boss solve it.

The mystery seems impossible to crack. Everyone with a motive has an alibi, and those without alibis don’t have a motive. Robin’s determined that this won’t be the case he’s unable to unravel. Not when he’s got his old boss to impress and a new team to lick into shape.

Back at home, Adam joins a fundraising choir to keep himself occupied. Surely a case that’s so far away won’t draw him in this time? Fate has other ideas, though, and danger turns up—quite literally—on his doorstep. He’ll need Campbell the Newfoundland for both company and protection this time around.

This tweet came up on my timeline, so I had to post about Ronnie Poulton Palmer was shot by a sniper near ‘Plugstreet’ Wood.

"I shall never play at Twickenham again…"

Those were the last words of England captain Ronnie Poulton Palmer as he lay dying having been shot by a sniper #OnThisDay in 1915.

Two years ago @LewisMoody7 brought him back to Twickenham 🌹

As for those alleged last words, “I shall never play at Twickenham again,” some folk think it unlikely he said them. I’m not so sure. I don’t envisage them being spoken seriously, if he had time to speak at all. Rather, they seem just the sort of ironic, laugh-in-the-face-of-death remark a rugby player would make.

Poulton seems to have inspired a great deal of affection from his friends. It’s hard not to see things through slash goggles, but extracts from letters such as this from Keith Rae to Poulton are very evocative: “I believe very firmly that there will be a Bright beyond after this war…My Love to you and God bless you, always your affectionate friend, Keith Rae.”

Army Chaplain Dick Dugdale wrote home to say, “You know I loved him {Poulton} more than anyone else,” and “Each passing year means one year less to wait for Ronald”.

Poulton died on 5th May 1915 and is buried at “Hyde Park corner”. Rae died on 30th July in the same year and is commemorated on the Menin Gate. Dugdale died on 24th October 1918. I like to think that he and Ronnie saw (and see!) each other again.

What the Mathematician said to the Statue Summer 1907

What the Mathematician said to the Engineer November 1907

My true love sent to me December 1907

My True Love sent to me postscript

On the occasion of their anniversary November 1909

May our days be merry and bright Winter 1910

A fit employment for a gentleman Summer 1912 (crossover ‘fanfic’)

A random collection of silly things:

Pride, Prejudice and all the rest.

Sign up for my newsletter - always goodies to be had!
Charlie Cochrane – Mysteries with a dash of slash, romances with just a pinch of spice
Blog at WordPress.com.