Happy new year! Wishing all of you all the very best for 2022.

Finishing the year with two (count them!) free stories appropriately for the season, one’s old and one’s new. The old story is in the Cambridge Fellows universe, with Jonty and Orlando celebrating New Year in their unique way. (Fanart care of the wonderful Elin Gregory.) 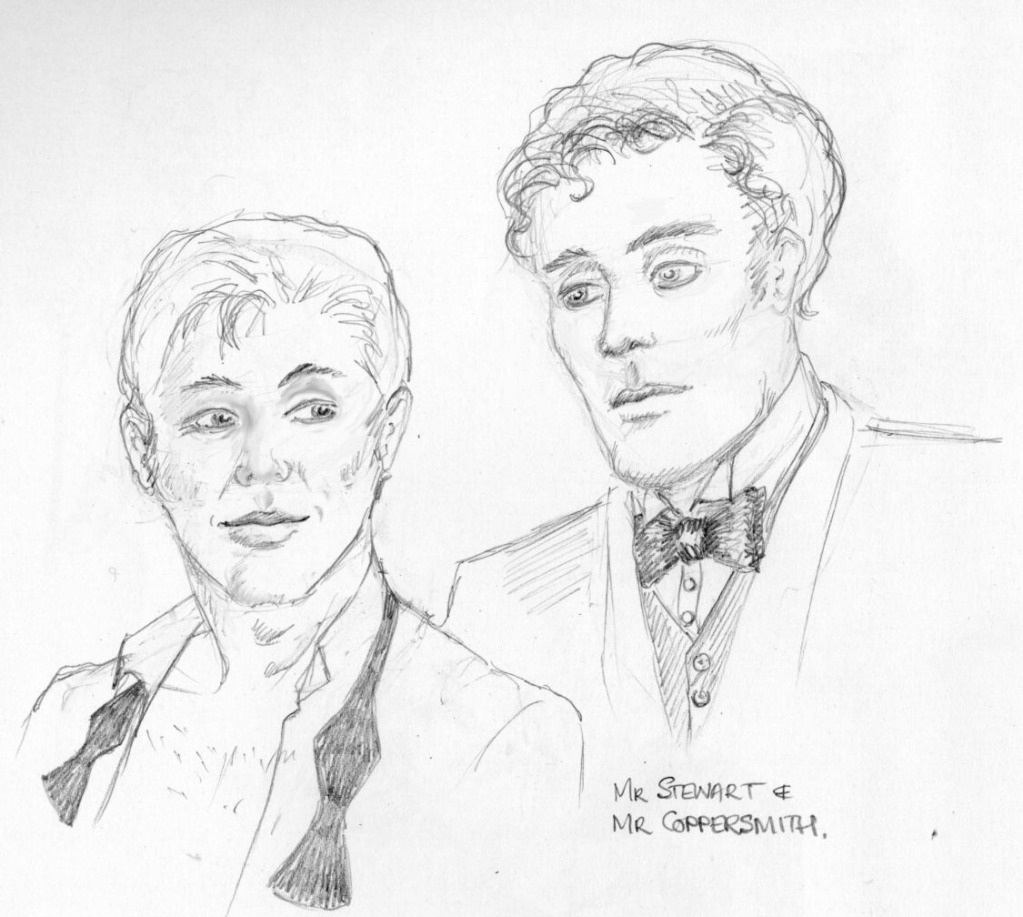 Ring in the New

“Wind’s getting up.” Jonty called, as he looked out of the sun lounge window—or was it snow lounge window?—at scudding clouds, hounding the winter sun from the sky. “I never thought I’d find a place colder than Cambridge, short of the North Pole, but this is it.” He unraveled the cord to pull down the blinds.
“No, leave it, if you will. I like to see the snow over the water.” Orlando had to shout as well, to be heard over the wind and at a room’s remove. The house on the river belonged to Rex Prefontaine’s mother—she’d come here as a child for long hot summers spent on the waters or down at the beach. She let her family have the use of it, but people rarely came between Thanksgiving and the spring equinox. Only visitors from foreign shores, who’d find a Massachusetts winter a novelty, dared to set out for a sojourn over New Year.
“It’s fine for you to say ‘leave it’. You’re not standing in here, in a draught—you’re cosied up by the fire.” Still, Jonty left the blinds up. It had been a wonderful view out into the sunset, the last remnants of which still lingered on the horizon.
“Then put on a thicker jumper or a scarf or something.” Orlando got up from his chair and came over. As soon as he opened the internal door, the cold hit him afresh. “Ruddy Norah, it feels like the arctic in here. Come back into the lounge like a sensible boy. Look at the snow from there.”
Jonty, for once, obeyed his lover without a fight. “Do you think we’ll get a fresh fall today?”
“I think it likely, given the colour of that sky. We could be stranded.” Orlando didn’t seem too worried. “We have fuel and, so long as the well’s accessible, water. You might run out of chocolate, though.”
“I thought you said we’d always be able to get along the road to the general store. I quite enjoyed trudging up there this morning. So long as they’ve got chocolate I’ll be happy.” Jonty rubbed his hands before the fire’s glow. “And a telegraph, so we can keep home informed. Sorry, Mama, see you in April…”

You can finish off the story here.

And now for the new…this was written for the local Romantic Novelists’ Association secret Santa story swop (try saying that after a gin or two).