Greetings, all. Hoping this finds you well and full of the joys of…well…almost autumn, really.

Author copies for The Case of the Grey Assassin arrived today (there’s a pleasure that never grows old). It’s in ebook as well, of course.

Toby Bowe and Alasdair Hamilton make the perfect partnership onscreen and off. While hiding their relationship tests their acting skills to the utmost, a shared penchant for amateur detection challenges their intellect in a way that making films never can.
When a practical joker appears to be targeting Landseer Studios, they’re the obvious men to investigate the affair but life turns tricky when they also get asked to help a film critic who’s receiving threatening letters. Suddenly they’re involved with the hunt for a serial killer and the case begins to cut too close to home for comfort… 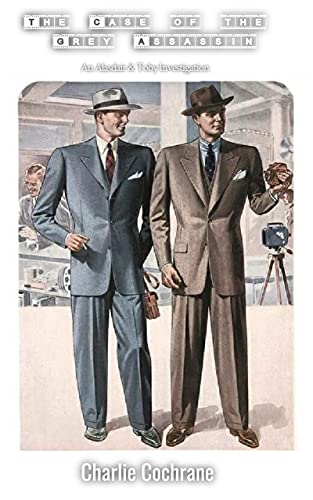 The first set of edits have gone back for Lock, Stock and Peril, the next in the Lindenshaw Series. Release date, cover art, etc when I have it finalised. Suffice to say that Campbell does feature – he’s definitely the readers’ favourite.

I do have a release date for the next Cambridge Fellows mystery novella, Lessons in Keeping a Dangerous Promise. Monday 6th December will see that let loose although the pre-order link isn’t yet live. That’s a job on my rather long list. I’ll also – as always – have a free story to offer you this December and this one’s set in the age of sail.

I’m delighted to say that the Children in Read auction opens tomorrow. I’ll be offering a print copy of Old Sins as the Lindenshaw book I offered last year went well. And it’s all for an excellent cause.

In case Old Sins passed you by…

Detective Chief Inspector Robin Bright and his partner, deputy headteacher Adam Matthews, have just consigned their summer holiday to the photo album. It’s time to get back to the daily grind, and the biggest problem they’re expecting to face: their wedding plans. Then fate strikes—literally—with a bang.
Someone letting loose shots on the common, a murder designed to look like a suicide, and the return of a teacher who made Robin’s childhood hell all conspire to turn this into one of his trickiest cases yet.
Especially when somebody might be targeting their Newfoundland, Campbell. Robin is used to his and Adam’s lives being in danger, but this takes the—dog—biscuit.

Excerpt:
“Are you awake?” a bleary voice sounded at Adam’s side.
“No. I’m fast asleep.”
“Pillock.” Robin turned, laying his right arm over Adam’s stomach. “Am I dreaming it or did you volunteer to cook breakfast today?”
“Yes. It’s my turn.” Which was why Adam had been lying in bed thinking, putting off the inevitable. “Although I can’t do so unless you let go of me.”
“Shame.” Robin kissed Adam’s shoulder. “I need to clone you so you can be cooking breakfast and romping about here with me at the same time.”
“If I were a woman, I’d accuse you of being a sexist pig. As it is, I’ll call you a lazy sod.” Adam threw off Robin’s arm, rolled him over, and slapped his backside. “Don’t lie here too long or I’ll give all your bacon to Campbell.”
“I’d fight him for it.”
They both got out of bed, Adam heading to the bathroom for a quick relieving visit before his partner got in there. On a work day, Robin showered and shaved speedily, but on occasions like this when he had the opportunity to take his leisure, he enjoyed lingering over his ablutions. And why not? He worked hard, so he should have the chance to enjoy life’s simple pleasures. As long as he didn’t linger too much and risk being presented with an incinerated sausage.
When Adam got down to the kitchen, Campbell greeted him with a rub against his legs, followed by a dash for the kitchen door. Lie-ins were great for the workers in the household, but not helpful for canine bladders. Opening that door took precedence over everything else first thing in the morning. Once that was done, Adam could get the kettle on, fish out the bacon—always best done while Campbell was otherwise occupied—put on some music, and potter about the kitchen content in the knowledge that the two creatures he loved best were happy. And long might that state of affairs continue.
Over breakfast, talk turned—inevitably—to their imminent return to work, although Robin insisted that shouldn’t be discussed for at least another twenty-four hours. He’d even banned them from watching crime shows over the holiday period, so as not to remind him of what awaited at Abbotston station.
Adam changed the subject to their regular discussion topic. “Am I allowed to mention work in the context of moving house to somewhere slightly more convenient for commuting?”
Given that both of them had relocated to new jobs since they started living together, the comfortable little cottage in Lindenshaw—that had once belonged to Adam’s grandparents, as had the infant Campbell—wasn’t quite as well located as it had been.
“Campbell says you can mention that all you want.” Robin grinned. “He wants a bigger garden to lumber about in. And he keeps reminding me we can afford it, maintenance and all.”
“That dog should get a job as an estate agent.” Or maybe a registrar. There was also the small matter of a civil partnership to sort out, which they’d decided on earlier in the year but not got any further in terms of planning.
“Mum was asking again,” Robin said when he’d finished the last bit of bacon.
Great minds were clearly thinking alike again. “Asking about what?”
Robin gently tapped Adam’s arm with the back of his hand. “Don’t pretend you don’t know. Have we set a date? Will she need her passport? Should she buy a winter hat or a spring one?”
“What did you tell her?”
“That what with the demands of school life and the unpredictable villains of Abbotston, it wasn’t easy to fix a weekend.”
All of which was true, but wouldn’t have mollified Mrs. Bright one bit. “And what did she say in response?”
Robin shrugged. “That she understood the predicament we were in, which I suspect was a lie because she then pointed out that other policemen and teachers manage to tie the knot.”