Happy new year! A few days late but just as heartfelt as if it had been on the day. I hope that 2020 is a truly blessed year for you.
Time for a review of the decade? Well…
Writing wise, the Lindenshaw Mysteries sprang into existence, as did my actor laddies cum sleuths in An Act of Detection. Romance-wise, there were the two Porthkennack books, and such shorts as the contemporary Don’t Kiss the Vicar and the WWI era Promises Made Under Fire. Lots of other books, as well, too many to mention.
Away from the keyboard, Mr C took early retirement and we suddenly discovered we had all sorts of opportunities to hand. We discovered cruising (no, not that sort) and watched far too much sport.
Best stroke of luck? The Olympic 2012 ballot where we got tickets for all of us for just one event out of the 4 we applied for. And even then, I don’t think we got them on the first draw but as a result of someone else not being able to pay for them. The event we got? Super Saturday, the evening athletics session where GB won three gold medals.

Had a lovely mention for the Cambridge boys in Jay Mountney’s review of the year. Always a pleasure to know that people enjoy my work – and thank you for the lovely e-mails I’ve received from you over the last few weeks. make me very happy.

I was having a trawl on Amazon and found that there are seven (count them!) of my books available for under two quid which is cheap as chips. (Actually, chips are no longer cheap so maybe I’d better find another saying.)

As we’re rapidly approaching twelfth night, the excerpt today is from What you Will, one of the stories in Love in Every Season. It’s a Shakespeare/steampunk mash up, based on Will’s play Twelfth Night and my fascination with the captain, Antonio, who is clearly gay. (And not the only gay man called Antonio that the bard featured. Begs the question why.)

They say there’s no fool like an old fool. Now, I don’t yet count myself as old, and back when this tale is set, forty was still a pinprick on the far side of the clouds for me, approaching but not yet too close. But I was a fool all right, more fool than any man ought to be who’s flown around the world and back again so often he might as well have just been going from Deptford to Dartford. There was a lad involved. There’s always a lad in the tale, isn’t there, for such as me?
And was there a happy ending? Now that depends on whether you believe what a certain playwright wrote, or whether you want the real story.

Act one, Scene one

“We’ll be passing Illyria in thirty minutes, Captain Antonio.”
“Thank you, Soames.” Illyria already? At that rate, come the week’s end, the silk we carried wouldn’t just be in the markets of London, it would already be girding the backside of some rich man’s mistress. Hell, this steamship set a cracking pace. I watched out my observation window as thin streams of clouds parted to show a turbulent sea, and the calmer, green and gold haze of the coastal strip. Just a sprinkling of snow on the hills, but at least today was clear.
How on earth had people managed in the days when the only route back to England from the Indies was by water? Over the Indian Ocean, beating round the Cape and back home only as fast as the wind would let you—it seemed another world, now.
I’d flown these routes before, back in the days when I was still a poacher. Plenty of rich pickings to be found.
What was the name of that trader my speedy little privateer took, these five years past? Phoenix; that was it. Phoenix, full of a treasure trove of jewels the size of quails’ eggs and spices so fresh you’d have sworn they were new picked. By God, we’d filled our purses that day.
Now that I’d in effect turned gamekeeper, I had legitimate cause to be flying over here but Illyria was still a name to bring out sweat on the back of my neck. I’d not dared to land there again, no matter how lucrative a trade contract I’d been offered.
The story’s a common one, me not knowing when to give up. I should have stopped flying when my pockets were full of Phoenix’s profits. I could have given my Letter of Marque back to Her Majesty’s men, then gone home and settled down, but the smell of the chase was always calling me and there was always another ship to hunt down.
Tiger, my last prize was called. We fell on her out of the sun; might have got away with it if she’d hauled her colours and just let us strip her of her cargo, but it came to a fight. Nasty, brutal fight, and all—Count Orsino’s nephew lost his leg and I was left a marked man. Set foot in Illyria and I was dead, the Count would see to that.
Still, I’d made a success of myself since those privateering days, making plenty of money to see me through a comfortable old age, once I’d had enough of flying, or it had had enough of me. All I lacked was someone to spend that time with.

And finally – one of the lovely Christmas trees from the Bournemouth gardens that I’ve been filling my FB and Instagram pages with. 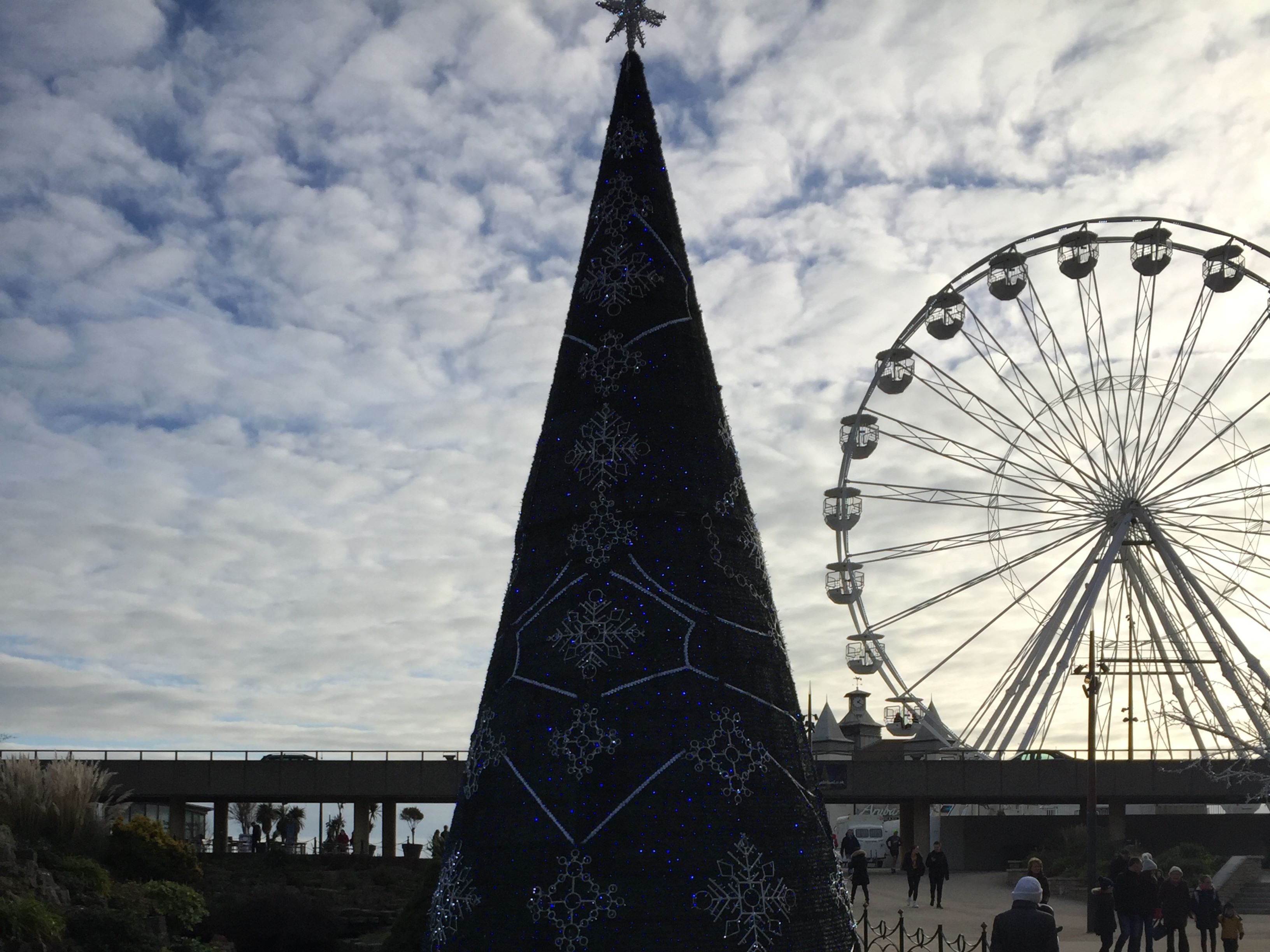